Drawing in an Applet

In this article, we will show you how to load an image or draw different shapes like an oval, rectangle and a line in an applet. To perform these operations, we are going to use three methods -:


In the upcoming code, we are going to use all the three methods discussed above to read and load an image from a specified location.
In order to run our applet using appletviewer, type the following command at command prompt-


Where Applet3.java is the name of java file that contains the code of an applet. In the code, as we are calling System.out.println() method, hence we are going to receive some output at the command promt on the execution of this applet.


Besides this, right after running the applet program using appletviewer a new applet window is displayed to us which contains our image- "wood.jpg" - 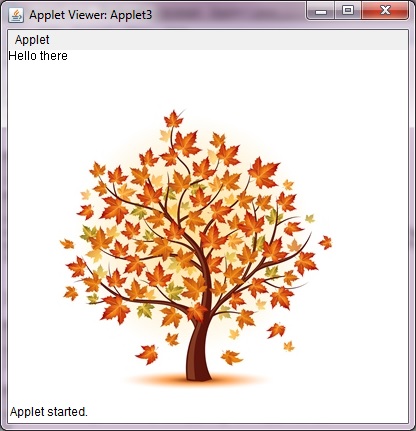 
In the next code, we are going to draw geometrical shapes in an applet, such as an Oval, Rectangle and a line, by calling appropriate methods of Graphics class.

Where Applet7.java is the name of java file that contains the code of an applet.

Our applet window with the geometrical shapes drawn in it.

< Prev
Next >
< Math operations with Applet
Resizing an Applet >