Swing framework gives us an ability to create window based applications and its easy to use graphical user interface(GUI). Swing Framework is part of Java Foundation Classes(JFC). Swing extends the capabilities of Abstract Window Toolkit(AWT) but, with a difference.


Difference between Swing and AWT?


When you run the code, you are presented a window showing the main container JFrame, which contains a component JLabel displaying a message like Figure1. 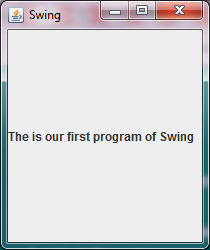