Hibernate is a middleware used for object-relational mapping and for performing efficient object persistence. To understand about the architecture of Hibernate, let's first take a look at how Hibernate fits in the development of an application, between an application and the database server.

For the reference, please look at the diagram below : 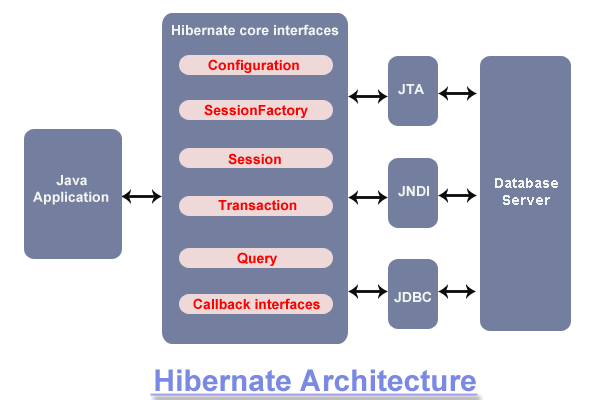 The architecture of Hibernate comprises of a few important interfaces. Let's discuss these interfaces and what exactly they are used for.

The Hibernate interfaces that are used by the applications to perform the create, read, update, delete(CRUD) operations and querying the database are Session, Transaction and Query.


Session interface is the main Hibernate interface used by the applications. Session object is lightweight and can be easily created or destroyed without overburdening the system resources. Session object is not thread-safe, hence it should not be used by multiple threads at one time. Session interface is mainly used for performing persistence operations like storing and retrieving the objects in and out of the database.


Query interface allows to query the database and also allows you to control how these queries are going to be executed. In Hibernate, queries are either written using Hibernate Query Language(HQL) or SQL. Query interface binds the parameters sent within a query, controls the number of results returned by the execution of query and execute the query.


Hibernate interfaces that allow an application to respond to the events performed by Hibernate, events such as saving, retrieving, updating, deleting the object. These interfaces are Inteceptor, Lifecycle and Validatable and together they are also known as Callback Interfaces.