Applet is a Java program that can be transported over the internet and executed by a Java-enabled web-browser(if a browser is supporting the applets) or an applet can be executed using the appletviewer utility provided with JDK. An appLet us created using the Applet class, which is a part of java.applet package. Applet class provides several useful methods to give you full control over the execution of an applet.

There are two types of the applet -


Some methods of Applet class

The lifecycle of an applet through its methods-

How to run an applet?

In order to run the applet code mentioned above, by using appletviewer, type the following command at command prompt- Where Applet1.java is the name of java file that contains the code of an applet. 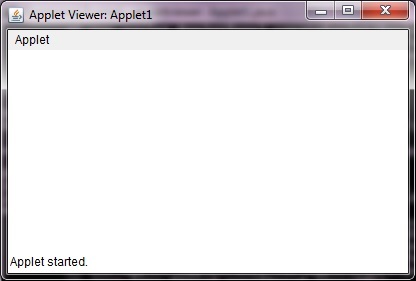 As soon as you close the window of your applet, a couple of methods will be called in sequence - Hence, you will get a couple of new messages at the command prompt due to the execution of stop () and destroy() method.