Objects and instance variables continue to live on Heap, until they are referenced by their reference variables. Objects are stored in the heap portion of memory and heap is limited in space.

Now, let's imagine you have created a program that is creating thousands of objects on the heap, such program could lead to a disaster for the heap memory especially if the unreferenced objects aren't deallocated from the heap memory.

If you were working in a programming languages like C, C++, you would have to write your own memory management code to make sure there is enough free space on heap memory.

Java provides the facility of automatic garbage collection through its facility - garbage collector which makes sure that the unreferenced objects are taken off the heap memory and thereby making sure that there is enough of space on heap to store new objects to efficiently run programs.


How a garbage collector helps in memory management?


When the garbage collector runs, it frees up the space on heap memory by finding and deleting those objects on it that are not referenced by any live program. This can be done in two ways -

As you may see in the diagram below that we have made a reference ob point to null, doing so makes this object(small blue circle) on heap(the big red circle) not referenced by any reference variable(hence the dotted line), which makes this object eligible for garbage collection. 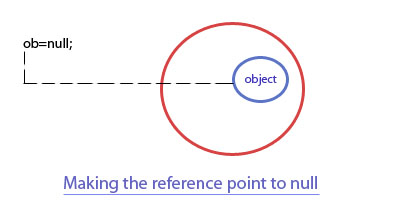 Please refer to the diagram below for ease of understanding. 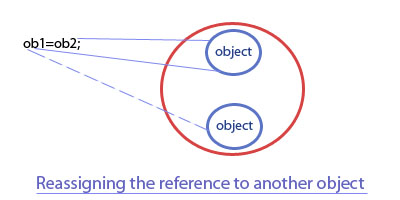 How do you make the garbage collector run?

What happens by calling a gc() method of System or Runtime class?

On many occasions garbage collection might not run at all at your request, so please don't rely on its execution.