Note: You may read extensively about Python try-catch. 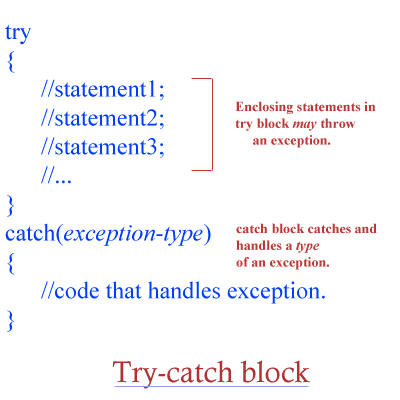 What if we don't catch an exception using try-except blocks?


Exception thrown has a certain type. In order to catch an exception of a specific type, we have to make sure that our except block has declared the same type of exception that is thrown by the try block. But, if an exception occurs during the execution of a program which doesn't handle it, the exception halts the normal execution of the program and it ends abruptly.

Here's a quick example of a view function(and its associated urls.py). On executing this view function, it throws an exception and ends the program abruplty as it was not handled by try-except blocks.

As you can see in the output of the example, an exception of type ZeroDivisionError is thrown when a statement enclosed within the getdata view function is executed. This exception was unhandled and uncaught, hence, you saw the exception notification sent by Django.

But if the thrown exception of type ZeroDivisionError was handled by the try-except block, the program would not have ended abruptly. So let us show an how to handle an exception within a Django project.

To create a directory for our project, we need to open the Command Prompt and type in the command -


Executing the startproject command has not only created a project directory named django_exception, but has also created a file manage.py and another sub-directory with the same name as the project directory, which also contains some Python files -


A project may contain one or multiple applications. As we have already created a project, now let us create a welcome application in it which welcomes the user. This application will be created right under our root - project directory django_exception.

To create an application, we have to open another window command prompt, change the current directory to the root directory of our Django project and execute the following command -


The command startapp in combination with manage.py utility is used to create an app of a project, using which we have created an app named - exception_handling.

Executing the startapp command has not only created an application directory named exception_handling in the root - project directory, but has also created the following set of Python files -

Creating an HTML template file for our app.

Note:
We have used the form variable with the as _p filter, which encapsulates each form field specified in forms.py file within an HTML paragraph tag.


Up next, we are going to create a form class named NameForm by extending the in-built Form class. This file will be created within the application i.e. exception_handling folder.

forms.py
As you can see in the form class NameForm, we have specified its two fields:


Once we have created the HTML template file in the application, we will also need to create a view which comprises of one of more view functions.

Note: This view functions are defined in the file view.py, which is already created and stored in our application directory, forms. Let us just copy and paste the following code in view.py.

In this view.py file, we have imported the render function from the django.shortcuts module and have defined two view functions:


After creating the view functions of an application, we need to specify the mapping between a URL and each view function in a file named - urls.py. The file urls.py is simply coded in Python and we will have to create the urls.py file in the folder of our application, exception_handling.


Next, we are going to point the project URL(urls.py) to the application URL(urls.py) by using the include() function. For this, we will open the file urls.py in the root - project directory, django_exception, and copy-paste the following code.


How to load the HTML template file.


Next, we are going to show how to load the above created HTML template file template.htm, which is stored within our application folder exception_handling.


Within the settings.py file, you need to locate the property DIRS and copy-paste the full-path to the HTML template file against it, as shown below and save the file.

And finally, it's time to execute our Django project with templates.