In our last tutorial, we have explained how to run a simple Django Framework project and for those who have read that tutorial must have seen that we had to mix the HTML with the python code in a single file, which could lead to a lot of issues, especially when working on a LIVE project.

To rectify this issue, we could use the Django Template System, using which we could separate the HTML file, which is carrying the presentation logic from the python file, which is representing the view function, and could link these separate files.

Let us create a Django project to explain you how to work with the Django Template System. For those who have not read our last tutorial, here is a recap.


A project may contain one or multiple applications. As we have already created a project, now let us create a welcome application in it which welcomes the user. This application will be created right under our root - project directory django_proj1.

To create an application, we have to open another window command prompt, change the current directory to the root directory of our Django project and execute the following command -

Next, we are going to create an HTML template file for this application.


Creating an HTML template file for our app.


Next, we are going to create an HTML template file within our application folder welcome, we will name this file template.htm. An HTML template file contains the static part(comprising the HTML output) as well as some special syntax describing how the dynamic content will be inserted into this HTML file.

template.htm
In this HTML template file, we have specified some variables(e.g. topic, website, date, signature, etc.) within the double curly brackets {{ }} are each a specific key in this dictionary, whose values are also defined and accessed from a view function(we are going to create it next).

Creating a view function for the app

Note: This view function is defined in the file view.py, which is already created and stored in our application directory, welcome. Let us just copy and paste the following code in view.py.

We have named this view function - dict_lookup().

Understanding the code in view.py :


How to load the HTML template file.


Next, we are going to show how to load the above created HTML template file template.htm, which is stored within our application folder welcome.

To load the HTML template file, we need to specify its full path in the configuration file - settings.py, which is stored in the project folder. For our example, you can find this file in the sub-directory django_proj1 within our project django_proj1 i.e. - django_proj1/django_proj1/settings.py.


Within the settings.py file, you need to locate the property DIRS and copy-paste the full-path to the HTML template file against it, as shown below and save the file.

And finally, it's time to execute our Django project with templates. 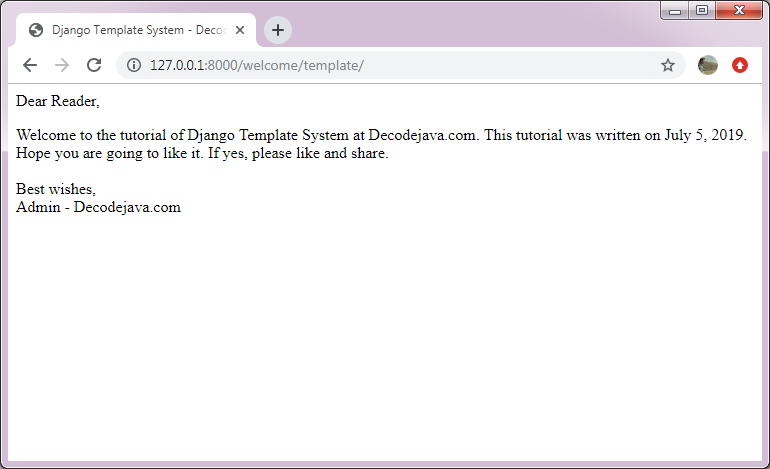 As you can see in the picture, the string welcome/template in the URL is the URL-pattern which gets matched to the URL pattern specified in the project urls.py file, which calls the application's urls.py and its associated view function - templ(in the application) is executed and its response is displayed within the HTML template file template.htm.


In the next tutorial, we are going to explain a situation when the django template system encounters a dot in a variable name, within an executing template. In such situation, django template System uses the dot lookups strategy. For more on this, please turn the page.