In this article, we are going to teach you how to run a simple Django Framework project. Before we execute a Django project, we need to create a directory for our project, which contains all the required files for its proper execution. Let's see how to do that.


A project may contain one or multiple applications. These apps are reusable i.e. they are portable and can be used in multiple project. If you are building a simple application, you may only need a single app or no app at all, but for a complex application with multiple features, it's better to create multiple apps in it, where each app is doing a specific job.

As we have already created a project, now let us create a welcome application in it which welcomes the user. This application will be created right under our root - project directory django_proj1.

To create an application, we have to open the command prompt, change the current directory to the root directory of our Django project and execute the following command -

Next, we are going to create a view function for this app.


Creating a view function for the app


Once we have created an application, we will also need to create a view function associated with it. A view function is simply a Python function which takes an HttpRequest and returns an HttpResponse. The response could be an HTML page, an image, an XML document or even an error page.

Note: This view function, view.py is already created and stored in our application directory, welcome. Let us just copy and paste the following code in it.

Understanding the code in view.py function :


After creating the view function, we need to specify the mapping between a URL and this view function in a file named - urls.py. The file urls.py is simply coded in Python and we will have to create the urls.py file in the folder of our application, welcome. 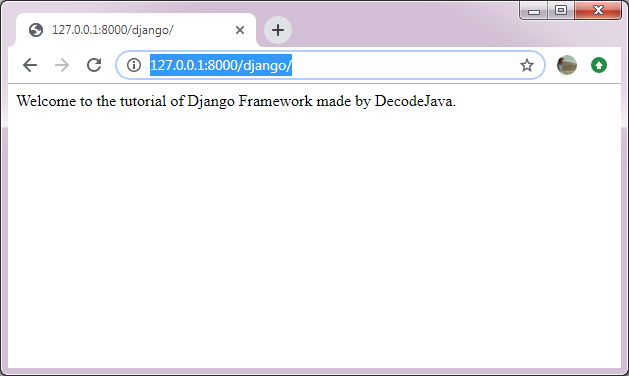 As you can see in the picture, the string django in the URL is the URL-pattern which gets matched to the URL pattern specified in the project urls.py file and its associated view function - greet(in the application) is executed and its response is displayed.