What is an Exception in Python?


Exception in Python language is an unusual exceptional event(describing an error), which occurs only during the runtime of a program.

During the execution of a program, when an exception occurs, it is said to be thrown by the Python interpreter.


Some situations due to which an Exception may arise :


What happens when an Exception is thrown? 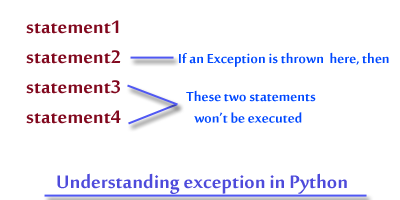 Looking at the diagram above, it is easy to understand that if an exception is thrown when statement2 is executed, the program ends abruptly without executing any statement after it. Hence, statement3 and statement4 will not be executed as a result of an exception at statement2.

Some important types of Exceptions in Python:


In the table below, we have given a short preview about some important exceptions in Python.

In the next few articles, we will discuss some very important keywords which are used to handle exceptions - try, except, finally and raise.