Today we are going to understand how to map inheritance between the classes to the database with Hibernate using the mapping resource xml file(without using Annotation). As you already know, inheritance is used when a class wants to use/inherit the features of another existing class.

The class that wants to use the feature of another class, is called subclass, whereas the class whose features are to be used/inherited is referred to as superclass. A class inheriting from another class, can access its features and can also add its own specific features.

Let's take an example of an Entity class - Country, which is extended by two classes AsianCountry and EurpoeanCountry. By default, Hibernate performs the inheritance between classes by combining all of their objects under single table and this strategy is also called Single Table Strategy. Now, let's see how Hibernate performs object-relational-mapping(ORM) to represent the inheritance between these three classes in the database.


Creating the class that calls the Hibernate API - Utility class


This class will create objects of all the three classes(parent and its subclasses) involved in inheritance, which will be persisted using the Hibernate API and an object-relational mapping(ORM) in the database is performed.


This mapping document ends with an extension .hbm.xml, hence, we have named it employeedetails.hbm.xml.

This mapping document has <hibernate-mapping> as the root element and its child element <class>, containing all the class elements.


The id element maps a property within the class to the primary key of the database table.


To differentiate between the three Entity classes, we have added a discriminator child element which allows us to add a column to the table and contains a discriminator-value for each object type.


The subclass element maps a subclass of an Entity parent class. 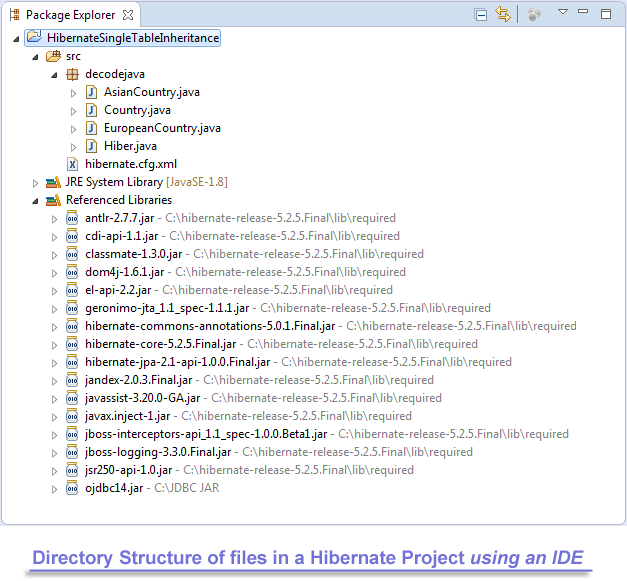 The picture above depicts how and where to arrange POJO/Entity(.java) file, its two child Entity classes and the class(that calls the hibernate into action) in a specific directory structure.

Project Folder - HibernateSingleTableInheritance is the name of our Project and it is a top-level directory.


When you execute the Hiber.java class, you will see the following output -


This output shows you all the SQL commands executed by the Hibernate within the database to map the inheritance between the Java classes to a database table and perform all the activities of saving the objects of all three Entity classes.


Finally, after executing Hiber class a new table will be constructed -

Moreover, if you type the following SQL query in the database -

you will get the following output displaying - 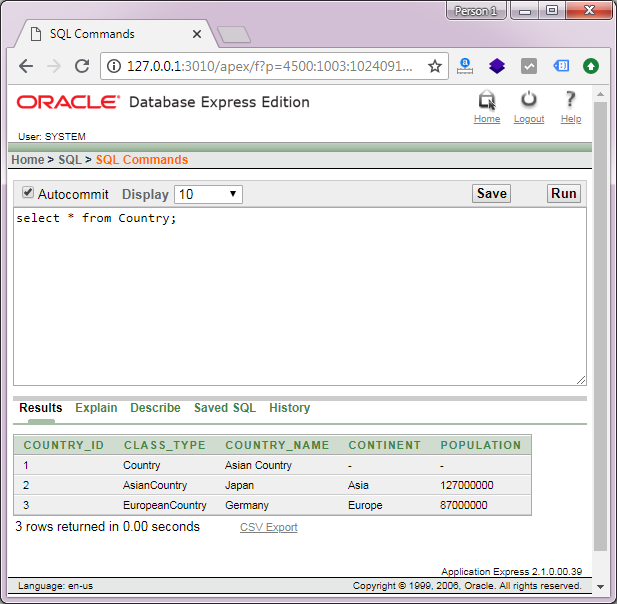 This table shows you how hibernate adds all the objects of classes involved in inheritance relationship, within a single database table, where CLASS_TYPE column shows you the class name of each object.