What is an Exception in C#?


In C# language, Exception is an error which occurs only during the runtime of a program.

When an exception occurs during the execution of a program, it is said to be thrown by the C# runtime system, which is known as Common Language Runtime(CLR).


Some situations due to which an Exception is thrown by a program:


What happens when an Exception is thrown? 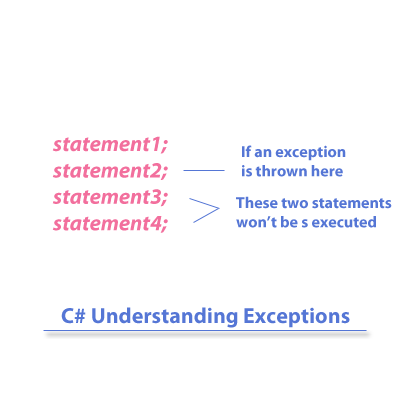 Looking at the diagram above, it is easy to understand that if an exception is thrown when statement2 is executed, the program ends abruptly without executing any statement after it. Hence, statement3 and statement4 will not be executed as a result of an exception at statement2.

Each exception has a type -:


In C#, there are many types of exceptions, where each exception type is represented by a class. A built-in class known as Exception, which is defined in the System namespace, is the base class for all exception classes i.e. all the exception classes are derived from it.

One of the most important subclasses of Exception class is SystemException class, from which all the exceptions thrown by C# runtime system(CLR) are derived.

In the table below, we have given a short preview about some important exceptions in C#.

In the next few articles, we will discuss some very important keywords which are used to handle exceptions, such as try, catch, finally and throw.