C# Lifecycle of a Thread

Note: The unstarted state could also be termed as the new state.

A thread in runnable state is considered to be alive. A thread can return to a runnable state after coming back from a sleeping, waiting/blocked or running state.


A thread enters the running state, when the thread scheduler has selected it to run(out of all the threads in the thread pool). In this state, a thread starts executing the Run() method and it is alive and kicking. From the running state, a thread can enter into not runnable/waiting/blocked state, runnable state, or the final, dead state. Let's depict these states too through a diagram - 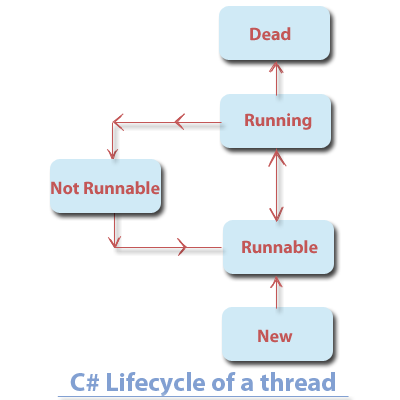 A thread enters the not runnable state in one of these situations -:
Apparently, some may also refer to this state as the WaitSleepJoin state.


When a thread finds itself in any of the above mentioned situations, such event pushes the thread into the not runnable state and the thread is no longer eligible to run, but even in this state, the thread is still considered to be alive.

This is the last state in a thread's lifetime. A thread enters the dead state after it has successfully completed executing its entry point method i.e. Run(), or when the Abort() method has been called on it to abort its execution. In this state, a thread is considered to be not alive and hence if you try to call Start() method on a dead thread, it raises the ThreadStateException exception(which we will read about in an upcoming article).