The class that wants to use the features of another class is called subclass or derived class, whereas the classes whose features are to be used/inherited is referred to as base classes.


What features a subclass inherits from its base class, through inheritance?


When a subclass inherits a base class, it inherits only the members of superclass that are marked with public, protected visibility modes, these members are - 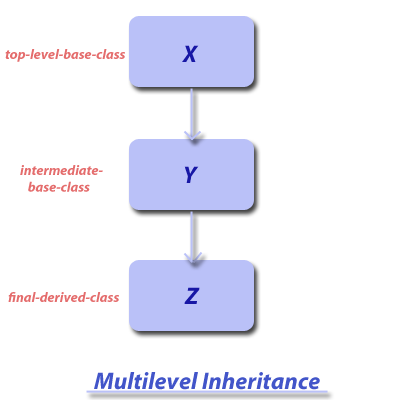 
Depending on the value of visibility-mode, multiple inheritance can be performed in various ways -

Let us see an example of a class which publicly inherit the feature of two classes(inheriting one class at a time) by another class, by performing multilevel inheritance.

Note : The private members of a class are never inherited. Hence, the property of X and Y class such as - x2 and y2 and functions like get_x() and get_y2() are not inherited by X class and they cannot be accessed by its object, doing so will result in a compile error.


This concludes our explanation on multilevel inheritance, in the next tutorial, we are going to discuss another type of inheritance hybrid inheritance. So, let's move to the next one.